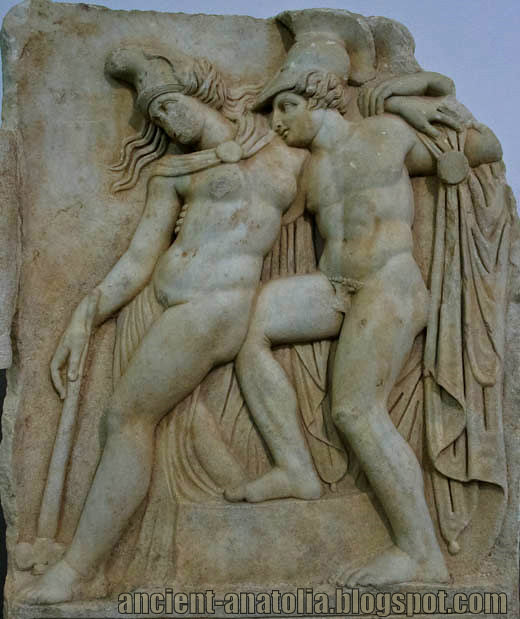 Achilles supporting the slumping figure of the Amazon queen Penthesilea whom he has mortally wounded. Her double headed axe slips from her hand. The queen had come to fight in the Trojan War against the invading Greeks. Between her being wounded and dying in his arms, the time presented here, Achilles fell in love with her. - Museum of Aphrodisias.

The Amazons are a nation of all-female warriors in Classical antiquity and Greek mythology. Were they just a romantic ancient myth or reality?

Notable queens of the Amazons are Penthesilea, who participated in the Trojan War, and her sister Hippolyte, whose magical girdle, given to her by her father Ares, was the object of one of the labours of Hercules. Amazonian raiders were often depicted in battle with Greek warriors in amazonomachies in classical art.

The Amazons have become associated with various historical peoples throughout the Roman Empire period and Late Antiquity. In Roman historiography, there are various accounts of Amazon raids in Asia Minor. From the Early Modern period, their name has become a term for woman warriors in general.

Amazons were said to have lived in Pontus, which is part of modern day Turkey near the shore of the Black Sea. There they formed an independent kingdom under the government of a queen named Hippolyta or Hippolyte. The Amazons were supposed to have founded many towns, amongst them Smyrna (modern Izmir, Turkey), Ephesus, Sinope (Sinop, Turkey), and Paphos (in Cyprus). According to the dramatist Aeschylus, in the distant past they had lived in Scythia (modern Crimea), at the Palus Maeotis ("Lake Maeotis", the Sea of Azov), but later moved to Themiscyra on the River Thermodon (the Terme river in northern Turkey).

In the Iliad, the Amazons were referred to as Antianeirai, those who fight like men.

In works of art, battles between Amazons and Greeks are placed on the same level as and often associated with battles of Greeks and centaurs.

Herodotus reported that the Sarmatians were descendants of Amazons and Scythians, and that their females observed their ancient maternal customs, "frequently hunting on horseback with their husbands; in war taking the field; and wearing the very same dress as the men". Moreover, said Herodotus, "No girl shall wed till she has killed a man in battle". 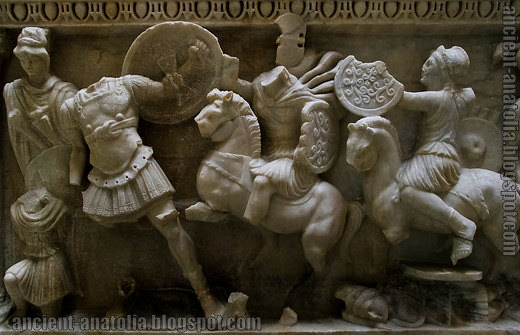 Amazonmachy, Amazon battle, marble sarcophagus, Kütahya Museum of Archaeology, Turkey, a portrayal of legendary battle between Greeks and Amazons. The mythic all-female warrior society was believed to have been defeated by the likes of Heracles and Theseus. The Amazonmachy symbolised the triumph of Greek civilization over the barbarian.