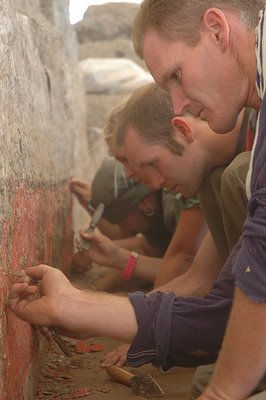 An excavation team led by British archeologist Douglas Baird has found a settlement occupied by a nomadic tribe 11,000 years ago in the Karatay district of Konya.

The occupants of Boncuklu Höyük, or literally the “Beaded Mound,” are thought to be ancestors of the people of Çatalhöyük, a very large Neolithic and Chalcolithic settlement in southern Anatolia. The deepest layers of the mound are thought to date from around 7,500 BC. (To give a timescale, remember that Stonehenge, a Neolithic and Bronze Age megalithic monument located near Amesbury in the English county of Wiltshire, about 8 miles north of Salisbury, was erected between 2500 BC and 2000 BC although the surrounding circular earth bank and ditch, which constitute the earliest phase of the monument, have been dated to about 3100 BC.)

The settlement will reveal information previously unknown about the lives of nomadic human communities in times before settlement, say archeologists.

Initial findings prove that the tribe's women used accessories of adornment even centuries before settlement.

Baird, an associate professor at the archeology department of Liverpool University, said Boncuklu Höyük was discovered during a side scan sonar. The team immediately took up excavation of the site. Çatalhöyük and Boncuklu Höyük, with very similar artifacts found at both sites, cannot be thought of separately, according to Baird, whose team thinks the people of Boncuklu Höyük preceded those in Çatalhöyük by 2,000 years.

Boncuklu Höyük is thought to have been a temporary settlement for nomadic tribes used for brief stays during the course of their journeys. In other words, they are the ancestors of Çatalhöyük.

The people of Boncuklu Höyük, like those of Çatalhöyük, did not have a completely settled lifestyle. According to Baind the descendants of that community might have migrated to Çatalhöyük, where they formed an early settlement, developing agriculture and raising stock.

Women liked to look pretty even then:

Forty-five years of excavation work in Çatalhöyük, located in the Çumra district of Konya, has created a sound understanding of early settlement during the Neolithic age, while Boncuklu Höyük is providing the opportunity to shed light on the lives of nomadic tribes before settlement.

Baird said the name Boncuklu Höyük was given to the site because the team had found quite a large number of artifacts with beads attached, thought to be symbols showing one's kinship relations as well as items of decoration. Bows and arrows and sharp-pointed artifacts used for cutting and grinding wheels were also found at the site.