An Expedition into the Origins of Civilization: Çatalhöyük Çatalhöyük was a very large Neolithic and Chalcolithic settlement in southern Anatolia, dating from around 7500 BCE for the lowest layers. It is perhaps the largest and most sophisticated Neolithic site yet uncovered.

Çatalhöyük is located overlooking wheatfields in the Konya Plain, southeast of the present-day city of Konya, Turkey, approximately 140 km from the twin-coned volcano of Hasan Dağ. The eastern settlement forms a mound which would have risen about 20 metres above the plain at the time of the latest Neolithic occupation. There is also a smaller settlement mound to the west and a Byzantine settlement a few hundred meters to the east. The prehistoric mound settlements were abandoned before the Bronze Age. A channel of the Çarsamba river once flowed between the two mounds, and the settlement was built on alluvial clay which may have been favourable for early agriculture. 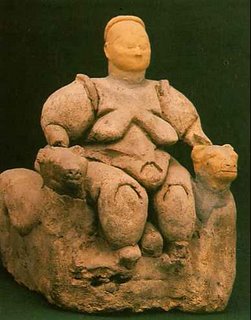 Archaeological history
First discovered in 1958, the Çatalhöyük site was brought to worldwide attention by James Mellaart's excavations between 1961 and 1965, which revealed this section of Anatolia as a centre of advanced culture in the Neolithic period. After Mellaart was banned from Turkey for involvement in the Dorak affair in which he published drawings of supposedly important Bronze Age artifacts that later went missing (see Pearson and Connor, below), the site lay idle until September 1, 1993, when investigations began under the leadership of Ian Hodder from the University of Cambridge. These investigations are among the most ambitious excavation projects currently in progress according to, among others, Colin Renfrew. In addition to extensive use of archaeological science, psychologists' and artists' interpretations of the symbolism of the wall paintings have also been employed.

Cultural findings
The complex settlement was described by Mellaart as the earliest city in the world. However, it is more properly described as a large village rather than a true town, city or civilisation. The community seems to have consisted entirely of domestic housing with open areas for dumping rubbish. There are no obvious public buildings or signs of division of labour, although some dwellings are larger than the rest and bear more elaborate wall paintings. The purpose of larger rooms remains unclear, though some sort of ritual purpose is suspected.

The population of the eastern mound has been estimated at up to 10,000 people, but population totals likely varied over the community’s history. An average population of between 5,000 to 8,000 is a reasonable estimate. The inhabitants lived in mud-brick houses which were crammed together in an agglutinative manner. No footpaths or streets were used between the dwellings, which were clustered in a honeycomb-like maze. Most were accessed by holes in the ceiling, which were reached by interior and exterior ladders. And this, makes their rooftops, their streets. The ceiling openings also served as the only source of ventilation, letting in fresh air and allowing smoke from open hearths and ovens to escape. Houses were made of plasters interiors were characterized by squared off timber ladders or steep stairs, usually placed on the south wall of the room, as were cooking hearths and ovens. Each main room served as an area for cooking and daily activities. Raised platforms built along the walls of main rooms were used for sitting, working and sleeping. These platforms, and all interior walls, were carefully plastered to a smooth finish. Ancillary rooms were used as storage, and were accessed through low entry openings from main rooms. All rooms were kept scrupulously clean. Archaeologists identified very little trash or rubbish within the buildings, but found that trash heaps outside the ruins contain sewage and food waste as well as significant amounts of wood ash. In good weather, many daily activities may also have taken place on the rooftops, which conceivably formed an open air plaza. In later periods, large communal ovens appear to have been built on these rooftops. Over time, houses were renewed by partial demolition and rebuilding on a foundation of rubble— which was how the mound became built up. Up to eighteen levels of settlement have been uncovered.

The people of Çatalhöyük buried their dead within the village. Human remains have been found in pits beneath the floors, and especially beneath hearths, the platforms within the main rooms and under the beds. The bodies were tightly flexed before burial, and were often placed in baskets or wrapped in reed mats. Disarticulated bones in some graves suggest that bodies may have been exposed in the open air for a time before the bones were gathered and buried. In some cases, graves were disturbed and the individual’s head removed from the skeleton. These heads may have been used in ritual, as some were found in other areas of the community. Some skulls were plastered and painted with ochre to recreate human-like faces, a custom more characteristic of Neolithic sites in Syria and at Neolithic Jericho than at sites closer by.

Vivid murals and figurines are found throughout the settlement, on interior and exterior walls. A wall map of the village is currently credited as the world's oldest map. Predominant images include men with erect phalluses, groups of men in hunting scenes, and red images of the now extinct aurochs and stags, and vultures swooping down on headless figures. Heads of animals were mounted on walls. In addition, distinctive clay figurines of women have been found in the upper levels of the site. Although no identifiable temples have been found, the graves, murals and figurines suggest that the people of Çatalhöyük had a religion that was rich in symbol. Rooms with concentrations of these items may have been shrines or public meeting areas. The people appear to have lived relatively egalitarian lives with no apparent social classes, as no houses with distinctive features (belonging to kings or priests, for example) have been found so far. The most recent investigations also reveal little social distinction based on gender, with both men and women receiving equivalent nutrition and apparently having relatively equal social status.

In upper levels of the site, it becomes apparent that the people of Çatalhöyük were gaining skills in agriculture and the domestication of animals. Female figurines have been found within bins used for storage of cereals such as wheat and barley. Peas were also grown, and almonds, pistachios, and fruit were harvested from trees in the surrounding hills. Sheep were domesticated and evidence suggests the beginning of cattle domestication as well. However, hunting continued to be a major source of meat for the community. The making of pottery and the construction of obsidian tools were major industries. Obsidian tools were probably both used and traded for items as Mediterranean sea shells and flint from Syria.

A striking feature of Catalhoyuk are its female figurines. Mellaart, the original excavator, argued that these well-formed, carefully made figurines, carved and molded from marble, blue and brown limestone, schist, calcite, basalt, alabaster and clay, represented female deity. Although a male deity existed as well, “…statues of a female deity far outnumber those of the male deity, who moreover, does not appear to be represented at all after Level VI” (James Mellaart, Catal Huyuk: A Neolithic Town in Anatolia. McGraw-Hill 1967, p. 181). These careful figurines were found primarily in areas Mellaart believed to be shrines. One, however – a stately seated Goddess flanked by two lions – was found in a grain bin, which Mellaart suggests might have been a means of ensuring the harvest or protecting the food supply (Mellaart, p. 180).

Whereas Mellaart excavated nearly two hundred buildings in four seasons, the current excavator, Ian Hodder, spent an entire season excavating one building alone (Michael Balter, The Goddess and the Bull, Free Press, 2005, p. 127). Nevertheless, Hodder, in 2004 and 2005, began turning up the same corpulent, carefully-made “Mother Goddess” figurines that Mellaart found in abundance. The 2005 female figurine was striking; according to the official Catalhoyuk website, it “…may force us to change our views of the nature of Catalhoyuk society…”:

“There are full breasts on which the hands rest, and the stomach is extended in the central part…. As one turns the figurine around one notices that the arms are very thin, and then on the back of the figurine one sees a depiction of either a skeleton or the bones of a very thin and depleted human. The ribs and vertebrae are clear, as are the scapulae and the main pelvic bones…. This is a unique piece that may force us to change our views of the nature of Catalhoyuk society and imagery” (official Catalhoyuk website 2005 Press Release: “New Finds at Catalhoyuk”).

Çatal Höyük or Çatal Hüyük, or any of the three without diacritics; çatal is Turkish for "fork", höyük for "mound".