Lycia (Lycian: Trmmisa) is a region in the modern day Antalya Province on the southern coast of Turkey. It was the site of an ancient country and province of the Roman Empire. 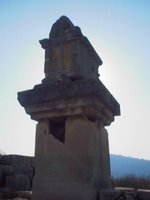 The region of Lycia has been inhabited by human groups since prehistoric times. The eponymous inhabitants of Lycia, the Lycians, spoke an Indo-European language, belonging to its Anatolian branch. The closest language to the Lycian language is the Luwian language, which was spoken in Anatolia during the 2nd and early 1st millennium BC; it may even be its direct ancestor. The Lycians were assimilated by Greek colonists who inhabited the region into modern times before Turks.

Lycia is a mountainous and densely forested region along the coast of southwestern Turkey on and around the Teke Peninsula. It is bounded by Caria to the west and north west, Pamphylia to the east, and Pisidia to the north east. Turkey's first waymarked long-distance footpath, the Lycian Way, follows part of the coast of the region.

The principal cities of ancient Lycia were Xanthos, Patara, Myra and Phaselis.

Ancient Egyptian records describe the Lycians as allies of the Hittites. Lycia may have been a member state of the Assuwa league of ca. 1250 BC, appearing as either Lukka or Luqqa. After the collapse of the Hittite Empire, Lycia emerged as an independent "Neo-Hittite" kingdom. 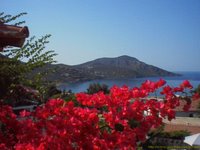 According to Herodotus, Lycia was named after Lycus, the son of Pandion II, king of Athens. The region was never unified into a single territory in antiquity, but remained a tightly-knit confederation of fiercely independent city-states.

Lycia was frequently mentioned by Homer as an ally of Troy. In Homer's Iliad, the Lycian contingent was said to have been lead by two esteemed warriors: Sarpedon (son of Zeus and Laodamia) and Glaucus (son of Hippolochus). Elsewhere in Greek mythology, the Lycian kingdom was said to have been ruled by another Sarpedon, a Cretan exile and brother to King Minos; Sarpedon's followers were called Termilae, and they founded a dynasty after their conquest of a people called the Milyans. As with the founding of Miletus, this mythical story implies a Cretan connection to the settlement of Asia Minor. Lycia appears elsewhere in Greek myth, such as in the story of Bellerophon, who eventually succeeded to the throne of the Lycian king Iobates (or Amphianax).

Lycia came under the control of the Persian Empire in 546 BC when Harpagus of Media, a general in the service of Cyrus II conquered Asia Minor. Harpagus's descendants ruled Lycia until 468 BC when Athens wrested control away. Persia then retook Lycia in 387 BC and held it until it was conquered by Alexander the Great. It subsequently passed into the hands of the Seleucids before falling to the Roman Republic in 189 BC. The heir of Augustus, Gaius Caesar, was killed there in 4 AD. In 43, the emperor Claudius annexed it to the Roman Empire and united it with Pamphylia as a Roman province. It subsequently became part of the Byzantine Empire before being overrun by the (Turkish) Ottoman Empire and eventually becoming part of Turkey. 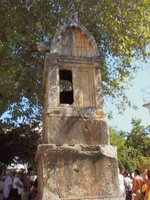 Though the second-century CE dialogue Erotes found the cities of Lycia "interesting more for their history than for their monuments, since they have retained none of their former splendor", many relics of the Lycians remain visible today, especially their distinctive rock-cut tombs in the sides of cliffs in the region.

Lycian tombs at Simena, Üçagiz (Turkey)The British Museum in London has one of the best collections of Lycian artifacts.

Lycia was an important center of worship for the goddess Leto and later, her twin children, Apollo and Artemis.

Lycian league
The Lycian League was established in 168 B.C. with democratic principals. It comprised some 23 known city-states as members.

Lycia, which had been under Rhodian control since the Peace of Apamea in 188 B.C., was granted independence by the Roman Empire at the conclusion of the Third Macedonian War. These city states joined together in a federalist style government that shared political resources against larger nations. A “Lyciarch” was elected by a senate that convened every autumn at a different city, where each member sent one, two or three representatives, depending on the city's size, to the senate, or Bouleuterion, as it was called. The major cities of the League included Xanthos, Patara, Pinara, Olympus, Myra, and Tlos, with Patara as the capital. Phaselis joined the League at a later time. The league continued to function after Lycia became a Roman province in 46 AD. Lycia ceased being a federation in the fourth century A.D., when it was taken over by the Byzantine Empire.

The archeological exploration of Lycia has uncovered numerous texts in the Lycian language. A number of these texts contain place names in their Lycian forms, including the following:

Trmmisa = Lycia, the ancient region now in Turkey (In conventional orthography, the third letter is an "m" with a tilde above it). 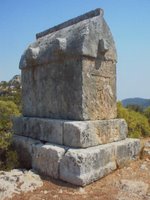