The statue of Hermes, an Olympian God who is a messenger of the gods, was found Monday during excavations at the Roman Bath in Ankara's Ulus district, Friday, August 3, 2007.

Hermes being restored The Hermes statue is estimated to belong to the second century A.D. and will be displayed at the Anatolian Civilizations Museum after restoration. The archaeologists working in the excavation noted that the statue was unique. The museums experts, who started restoration and conservation work, will analyze a piece of the statue in order to determine the method that will be used to clean the statue. Director of the Anatolian Civilizations Museum Hikmet Denizli said the statue of Hermes will be exhibited in the section displaying the findings belonging to the Roman period.

Denizli said, “We are now trying to determine where we will exhibit the 2.40 meter statue. Because it is too long in size, it cannot fit everywhere.” The statues of Hermes are being exhibited in a few places in Turkey such as Antalya and Ephesus. The statues are estimated to belong to the 2nd century A.D. These statues are identified by the cloak over their left shoulder. More... 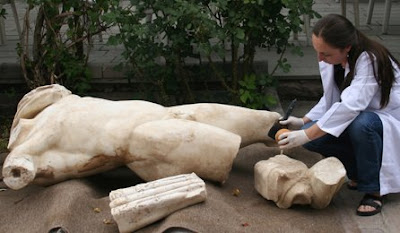 Hermes, in Greek mythology, is the Olympian god of boundaries and of the travelers who cross them, of shepherds and cowherds, of thieves and road travellers, of orators and wit, of literature and poets, of athletics, of weights and measures, of invention, of commerce in general, and of the cunning of thieves and liars. The analogous Roman deity is Mercury. The Homeric hymn to Hermes invokes him as the one :"of many shifts (polytropos), blandly cunning, a robber, a cattle driver, a bringer of dreams, a watcher by night, a thief at the gates, one who was soon to show forth wonderful deeds among the deathless gods.

He protects and takes care of all the travelers and thieves that pray to him or cross his path. He is the messenger of the gods and does his job very well. He is athletic and is always looking out for runners, or any athletes with injuries who need his help.

Hermes is a messenger from the gods to humans, sharing this role with Iris. An interpreter who bridges the boundaries with strangers is a hermeneus. Hermes gives us our word "hermeneutics" for the art of interpreting hidden meaning. In Greek a lucky find was a hermaion. Hermes delivered messages from Olympus to the mortal world. He wears shoes with wings on them and uses them to fly freely between the mortal and immortal world. Hermes, younger than Apollo, was the youngest of the Olympian gods.

Hermes, as an inventor of fire, is a parallel of the Titan, Prometheus. In addition to the syrinx and the lyre, Hermes was believed to have invented many types of racing and the sport of wrestling, and therefore was a patron of athletes.

According to prominent folklorist Meletinskii, Hermes is a deified trickster.

Hermes also served as a psychopomp, or an escort for the dead to help them find their way to the afterlife (the Underworld in the Greek myths). In many Greek myths, Hermes was depicted as the only god besides Hades, Persephone, and Hekate who could enter and leave the Underworld without hindrance.

Along with escorting the dead, Hermes often helped travelers have a safe and easy journey. Many Greeks would sacrifice to Hermes before any trip.

In the fully-developed Olympian pantheon, Hermes was the son of Zeus and the Pleiade Maia, a daughter of the Titan Atlas. Hermes' symbols were the rooster and the tortoise, and he can be recognized by his purse or pouch, winged sandals, winged cap, and the herald's staff, the kerykeion. Hermes was the god of thieves because he was very cunning and shrewd and was a thief himself from the night he was born, when he slipped away from Maia and ran away to steal his elder brother Apollo's cattle.

In the Roman adaptation of the Greek religion (see interpretatio romana), Hermes was identified with the Roman god Mercury, who, though inherited from the Etruscans, developed many similar characteristics, such as being the patron of commerce.