Altar of Zeus at Mount Ida 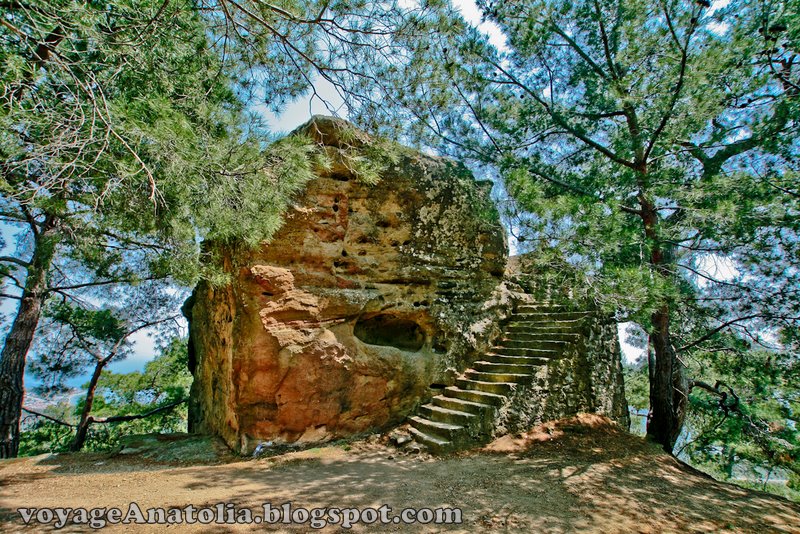 Altar of Zeus on 275m hill watching Adramyttian Gulf and Lesbos Island at land of Troy. It is a stone structure with stairs upon which offerings such as sacrifices and votive offerings are made for religious purposes, or some other sacred place where ceremonies take place. High places and elevated areas on which altars have been erected for worship in the belief that, as they were nearer heaven than the plains and valleys, they are more favourable places for prayer.

The mountain is the scene of several mythic events in the works of Homer. At its summit, the Olympian gods gathered to watch the progress of the epic fight. But the mountain was the sacred place of the Goddess, and Hera's powers were so magnified on Mount Ida, that she was able to distract Zeus with her seductions, just long enough to permit Poseidon to intercede on behalf of the Argives to drive Hektor and the Trojans back from the ships.

During the Trojan War, in an episode recorded in Apollodorus's Epitome, Achilles with some of the Achaean chiefs laid waste the countryside, and made his way to Ida to rustle the cattle of Aeneas. But Aeneas fled, and Achilles killed the cowherds and Nestor, son of Priam, and drove away the sacred kine (Epitome 3.32). Achilles briefly refers to this incident as he prepares to duel with Aeneas during the siege of Troy. (Iliad XX)

After the Trojan War, the only surviving son of Priam, Helenus, retired to Mount Ida, where he was surprised and became the captive of Neoptolemus.

On the sacred mountain, the nymphs who were the daughter-spirits of the river Cebrenus, had their haunt, and one, Oenone, who had the chthonic gifts of prophetic vision and the curative powers of herb magic, wed Paris, living as a shepherd on Mount Ida. Unbeknownst to all, even to himself, Paris was the son of Priam, king of Troy. He was there on Mount Ida, experiencing the rustic education in exile of many heroes of Greek mythology, for his disastrous future effect on Troy was foretold at his birth, and Priam had him exposed on the sacred slopes. When the good shepherd who was entrusted with the baby returned to bury the exposed child, he discovered that he had been suckled by a she-bear (a totem animal of the archaic goddess Artemis) and took the child home to be foster-nursed by his wife.

When Eris ("discord") cast the Apple of Discord, inscribed "for the fairest", into the wedding festivities of Peleus with Thetis, three great goddesses repaired to Mount Ida to be appraised. By a sacred spring on the mountainside, in "the Judgment of Paris", the grown youth Paris awarded it to Aphrodite, who offered Helen for a bribe, earning the perpetual enmity of the discredited goddesses Hera and Athena to the Trojan cause (Apollodorus, 3:12.5). Wikipedia