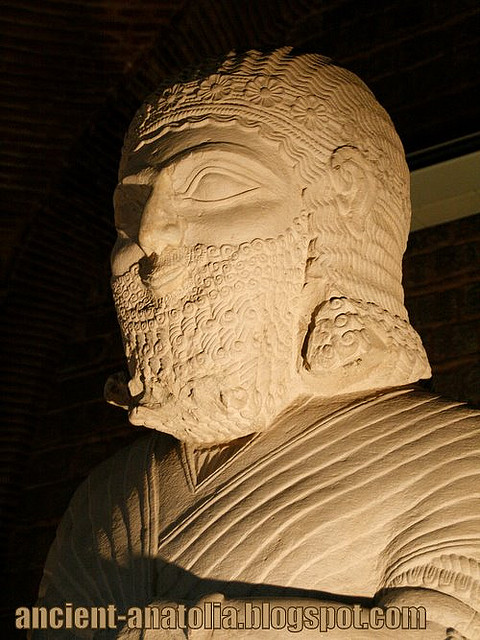 Talmi-Teššup ruled from the late 13th Century BC to the beginning of the twelfth century BC as king of Carchemish. Under him, Carchemish survived troubled years after the fall of the Hittite Kingdom. A seal from Ugarit shows him as son and successor of the ini-Teššup. As the king of Carchemish, he was the deputy of the Hittite king in Syria and was able to make his own decisions. He governed the divorce of Hittite princess Ehli-Nikkal of Ugaritic king 'Ammurapi III. Fragments of an agreement between Talmi-Teššup and Suppiluliuma II found in Hattuša (CTH 122) suggest that the king of Carchemish in the final phase of the Hittite Empire was almost equal to the Great King of Hatti. Succeeded by his son-Kuzi Teššup who described himself as a great king.

Teshub (Tešup) was the Hurrian god of sky and storm. He was derived from the Hattian Taru. His Hittite and Luwian name was Tarhun (with variant stem forms Tarhunt, Tarhuwant, Tarhunta), although this name is likely from the Proto-Indo-European Perkūnas or the Hittite root *tarh- to defeat, conquer.

He is depicted holding a triple thunderbolt and a weapon, usually an axe (often double-headed) or mace. The sacred bull common throughout Anatolia was his signature animal, represented by his horned crown or by his steeds Seri and Hurri, who drew his chariot or carried him on their backs. In the Hurrian schema, he was paired with Hebat the mother goddess; in the Hittite, with the sun goddess of Arinna—a cultus of great antiquity which may ultimately derive from the bull god and mother goddess worshipped at Çatalhöyük in the Neolithic era. Myths also exist of his conflict with the sea creature (possibly a snake or serpent) Hedammu (CTH 348). His son was Sarruma. According to Hittite myth, one of his greatest acts was the slaying of the dragon Illuyanka.

Carchemish (called Europus by the Greco-Romans) was an important ancient city of the Mitanni, Hittite and Neo Assyrian Empires, now on the frontier between Turkey and Syria. It was the location of an important battle between the Babylonians and Egyptians, mentioned in the Bible. The city is said to be known locally as Jarablos linking it to the Biblical city of Jerablus; a corrupted form of the name is Djerabis. Indeed, just to the south of the Turkish-Syrian border lies the town of Carablus; the other side of the border hosts the Turkish town of Karkamis.