Göbeklitepe, the Origins of Civilization 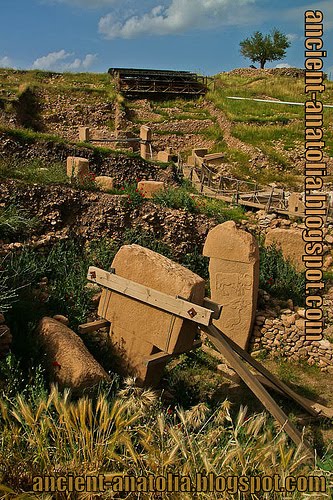 "We used to think agriculture gave rise to cities and later to writing, art, and religion. Now the world’s oldest temple suggests the urge to worship sparked civilization".

Göbekli Tepe is the oldest human-made place of worship yet discovered. Until excavations began, a complex on this scale was not thought possible for a community so ancient. The massive sequence of stratification layers suggests several millennia of activity, perhaps reaching back to the Mesolithic. The oldest occupation layer (stratum III) contains monolithic pillars linked by coarsely built walls to form circular or oval structures. So far, four such buildings, with diameters between 10–30 metres (33–98 ft) have been uncovered. Geophysical surveys indicate the existence of 16 additional structures.

Stratum II, dated to Pre-Pottery Neolithic B (PPNB) (7500–6000 BC), has revealed several adjacent rectangular rooms with floors of polished lime, reminiscent of Roman terrazzo floors. The most recent layer consists of sediment deposited as the result of agricultural activity.

The monoliths are decorated with carved reliefs of animals and of abstract pictograms. The pictograms may represent commonly understood sacred symbols, as known from Neolithic cave paintings elsewhere. The carefully carved figurative reliefs depict lions, bulls, boars, foxes, gazelles, asses, snakes and other reptiles, insects, arachnids, and birds, particularly vultures and water fowl. At the time the shrine was constructed the surrounding country was much lusher and capable of sustaining this variety of wildlife, before millennia of settlement and cultivation resulted in the near–Dust Bowl conditions prevailing today.

Vultures also feature in the iconography of the Neolithic sites of Çatalhöyük and Jericho; it is believed that in the early Neolithic culture of Anatolia and the Near East the deceased were deliberately exposed in order to be excarnated by vultures and other birds of prey. (The head of the deceased was sometimes removed and preserved—possibly a sign of ancestor worship.) This, then, would represent an early form of sky burial, as practiced today by Tibetan Buddhists and Zoroastrians in India. Few humanoid forms have surfaced at Göbekli Tepe, but include a relief of a naked woman, posed frontally in a crouched position, that Schmidt likens to the Venus accueillante figures found in Neolithic north Africa; and of at least one decapitated corpse surrounded by vultures. Some of the pillars, namely the T-shaped ones, have carved arms, which may indicate that they represent stylized humans (or anthropomorphic gods). Another example is decorated with human hands in what could be interpreted as a prayer gesture, with a simple stole or surplice engraved above; this may be intended to represent a temple priest.

The houses or temples are round megalithic buildings. The walls are made of unworked dry stone and include numerous T-shaped monolithic pillars of limestone that are up to 3 metres (9.8 ft) high. Another, bigger pair of pillars is placed in the centre of the structures. There is evidence that the structures were roofed; the central pair of pillars may have supported the roof. The floors are made of terrazzo (burnt lime), and there is a low bench running along the whole of the exterior wall.

While the site formally belongs to the earliest Neolithic (PPN A), up to now no traces of domesticated plants or animals have been found. The inhabitants were hunters and gatherers who nevertheless lived in villages for at least part of the year. Schmidt speculates that the site played a key function in the transition to agriculture; he assumes that the necessary social organization needed for the creation of these structures went hand-in-hand with the organized exploitation of wild crops. For sustenance, wild cereals may have been used more intensively than before; perhaps they were even deliberately cultivated. Recent DNA analysis of modern domesticated wheat compared with wild wheat has shown that its DNA is closest in structure to wild wheat found on Mount Karaca Dağ 20 miles (32 km) away from the site, leading one to believe that this is where modern wheat was first domesticated. Schmidt considers Göbekli Tepe a central location for a cult of the dead. He suggests that the carved animals are there to protect the dead. Though no tombs or graves have been found so far, Schmidt believes they remain to be discovered beneath the sacred circles' floors. Schmidt also interprets it in connection with the initial stages of an incipient Neolithic. It is one of several neolithic sites in the vicinity of Mount Karaca Dağ, an area where geneticists suspect the origins of at least some of our cultivated grains (see Einkorn). Such scholars suggest that the Neolithic revolution, i.e., the beginnings of grain cultivation, took place here. Schmidt and others believe that mobile groups in the area were forced to cooperate with each other to protect early concentrations of wild cereals from wild animals (herds of gazelles and wild donkeys). This would have led to an early social organization of various groups in the area of Göbekli Tepe. Thus, according to Schmidt, the Neolithic did not begin on a small scale in the form of individual instances of garden cultivation, but started immediately as a large-scale social organisation ("a full-scale revolution").

All statements about the site must be considered preliminary, as only about 5% of the site's total area has been excavated as yet; floor levels have been reached in only the second complex (complex B), which also contained a terrazzo-like floor. Schmidt believes that the dig could well continue for another fifty years, "and barely scratch the surface." So far excavations have revealed very little evidence for residential use. Through the radiocarbon method, the end of stratum III can be fixed at c. 9000 BC (see above); its beginnings are estimated to 11,000 BC or earlier. Stratum II dates to about 8000 BC.

Thus, the structures not only predate pottery, metallurgy, and the invention of writing or the wheel; they were built before the so-called Neolithic Revolution, i.e., the beginning of agriculture and animal husbandry around 9000 BC. But the construction of Göbekli Tepe implies organisation of an order of complexity not hitherto associated with pre-Neolithic societies. The archaeologists estimate that up to 500 persons were required to extract the 10–20-metric-ton (9.8–20 LT; 11–22 ST) pillars (in fact, some weigh up to 50 metric tons (49 LT; 55 ST)) from local quarries and move them 100–500 metres (330–1,600 ft) to the site. It is generally believed that an elite class of religious leaders supervised the work and later controlled whatever ceremonies took place here. If so, this would be the oldest known evidence for a priestly caste—much earlier than such social distinctions developed elsewhere in the Near East.

Around the beginning of the 8th millennium BC "Potbelly Hill" lost its importance. The advent of agriculture and animal husbandry brought new realities to human life in the area, and the "stone-age zoo" (as Schmidt calls it) depicted on the pillars apparently lost whatever significance it had had for the region's older, foraging, communities. But the complex was not simply abandoned and forgotten, to be gradually destroyed by the elements. Instead, it was deliberately buried under 300 to 500 cubic metres (390 to 650 cu yd) of soil. Why this was done is unknown, but it preserved the monuments for posterity. Göbekli Tepe is regarded as an archaeological discovery of the greatest importance since it profoundly changes our understanding of a crucial stage in the development of human societies. It seems that the erection of monumental complexes was within the capacities of hunter-gatherers and not only of sedentary farming communities as had been previously assumed. In other words, as excavator Klaus Schmidt puts it: "First came the temple, then the city." This revolutionary hypothesis will have to be supported or modified by future research.

Not only its large dimensions, but the side-by-side existence of multiple pillar shrines makes the location unique. There are no comparable monumental complexes from its time. Nevalı Çori, a well-known Neolithic settlement also excavated by the German Archaeological Institute, and submerged by the Atatürk Dam since 1992, is 500 years later, its T-shaped pillars are considerably smaller, and its shrine was located inside a village; the roughly contemporary architecture at Jericho is devoid of artistic merit or large-scale sculpture; and Çatalhöyük, perhaps the most famous of all Anatolian Neolithic villages, is 2,000 years younger.

Schmidt has engaged in some speculation regarding the belief systems of the groups that created Göbekli Tepe, based on comparisons with other shrines and settlements. He assumes shamanic practices and suggests that the T-shaped pillars may represent mythical creatures, perhaps ancestors, whereas he sees a fully articulated belief in gods only developing later in Mesopotamia, associated with extensive temples and palaces. This corresponds well with an ancient Sumerian belief that agriculture, animal husbandry and weaving had been brought to mankind from the sacred mountain Du-Ku, which was inhabited by Annuna—deities, very ancient gods without individual names. Klaus Schmidt identifies this story as an oriental primeval myth that preserves a partial memory of the Neolithic. It is also apparent that the animal and other images give no indication of organized violence, i.e., there are no depictions of hunting raids or wounded animals, and the pillar carvings ignore game on which the society mainly subsisted, like deer, in favor of formidable creatures such as lions, snakes, spiders and scorpions. At present, Göbekli Tepe raises more questions for archaeology and prehistory than it answers. We do not know how a force large enough to construct, augment, and maintain such a substantial complex was mobilized and paid or fed in the conditions of pre-Neolithic society. We cannot "read" the pictograms, and do not know for certain what meaning the animal reliefs had for visitors to the site; the variety of fauna depicted, from lions and boars to birds and insects, makes any single explanation problematic. As there seems to be little or no evidence of habitation, and the animals depicted on the stones are mainly predators, the stones may have been intended to stave off evils through some form of magic representation; it is also possible that they served as totems. It is not known why more and more walls were added to the interiors while the sanctuary was in use, with the result that some of the engraved pillars were obscured from view. Burial may or may not have occurred at the site. The reason the complex was eventually buried remains unexplained. Until more evidence is gathered, it is difficult to deduce anything certain about the originating culture.