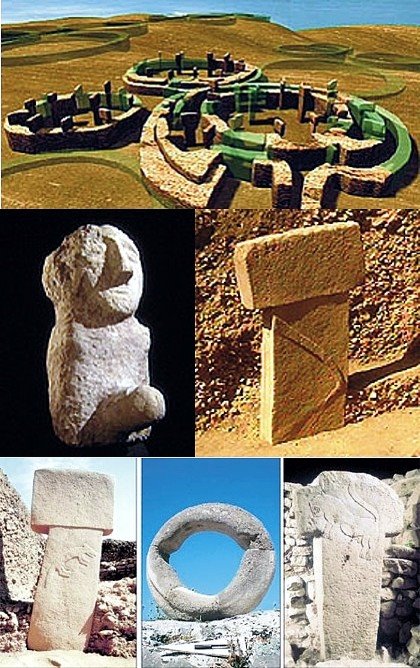 Göbekli Tepe is an early Neolithic site in Urfa, southeastern Turkey. It is famous for containing the world's oldest known stone temples (dated to before 9000 BC), and because it contradicts the long-held belief that the introduction of agriculture preceded the construction of large buildings. Göbekli Tepe was created by hunter-gatherers, yet is assumed to be a key location for understanding the origins of agriculture. (To give a timescale, remember that Stonehenge, a Neolithic and Bronze Age megalithic monument located near Amesbury in the English county of Wiltshire, about 8 miles north of Salisbury, was erected between 2500 BC and 2000 BC although the surrounding circular earth bank and ditch, which constitute the earliest phase of the monument, have been dated to about 3100 BC.)

The site is located 15 km northeast of Urfa on the top of a range of limestone-hills that forms the southeastern extension of the Taurus Mountains. The name means "hill with a navel". The tell (artificial settlement hill) is 15 m high and 300 m in diameter.

Göbekli Tepe is situated in that part of the Fertile Crescent that genetic studies have identified as the likely place of origin of einkorn wheat, the first domesticated cereal.

History of research
The site was discovered in 1963 during a survey. Since 1995, excavations have been conducted by the museum Urfa and the German Archaeological Institute (DAI) Istanbul. The excavation is directed by Dr. Klaus Schmidt (University of Heidelberg). Scholars from the University of Karlsruhe are documenting the architectural remains.

Dating
The PPN A settlement has been dated to ca. 9000 BC. There are remains of smaller houses from the PPN B and some few epipalaeolithic finds as well. There are a number of radiocarbon dates:

Economy
While the site formally belongs to the earliest Neolithic (PPN A), up to now no traces of domesticated plants or animals have been found. The inhabitants were hunters and gatherers. Schmidt speculates that the site played a key function in the transition to agriculture; he assumes that the necessary social organization needed for the creation of these structures went hand-in-hand with the organized exploitation of wild crops.

Architecture
The houses or temples are round megalithic buildings. The walls are made of unworked dry stone and include numerous T-shaped monolithic pillars of limestone that are up to 3 m high. Another, bigger pair of pillars is placed in the centre of the structure. The floors are made of terrazzo (burnt lime), and there is a low bench running along the whole of the exterior wall.

The reliefs on the pillars include foxes, lions, cattle, wild boars, herons, ducks, scorpions, ants and snakes. Some of the reliefs have been deliberately erased, maybe in preparation for new pictures. There are freestanding sculptures as well that may represent wild boars or foxes. As they are heavily crusted with lime, it is sometimes difficult to tell. Comparable statues have been discovered in Nevali Cori, Turkey and Nahal Hemar. The quarries for the statues are located on the plateau itself, some unfinished pillars have been found there in situ. The biggest unfinished pillar is still 6,9 m long, a length of 9m has been reconstructed. This is much larger than any of the finished pillars found so far. The stone was quarried with stone picks. Bowl-like depressions in the limestone-rocks have maybe been used as mortars in the epipalaeolithic already. There are some phalli and geometric patterns cut into the rock as well, and their dating is uncertain.

Finds
The buildings are covered with settlement refuse that must have been brought from elsewhere. These deposits include flint tools like scrapers and arrowheads and animal bones. The lithic inventory is characterised by Byblos points and numerous Nemrik-points. There are Helwan-points and Aswad-points as well.

There is no evidence of inhabitation; the structures are interpreted as temples. After 8000 BC, the site was abandoned and purposefully covered up with soil.